The last two weeks have been a downpour of not-so-fun. To get things started, I had ear surgery (which I will tell you more about in another post). During the recovery process, I am not allowed to lift any of my kids, which is difficult enough on a regular basis, but when they get hurt… not so easy. I was at least happy the surgery was over; At least until I have to go back to do the other side, but I’m trying to think about that right now… yikes.

The weekend following the surgery was pretty uneventful, as I spent it resting and recovering. And can I just ask why it is takes something like surgery to finally get a day of rest??? This was the first few days of rest I think I have had in the last seven years. Seriously! That being said, I took full advantage. I hid away under my cozy covers in my somewhat stylish sweats, while I binge watched the entire Girlboss series on Netflix. I have never been left alone to rest, and was pretty much waiting to be caught by some kind of parent police at any given moment.

All of a sudden, crash. And then I heard my baby boy scream. He’s one now, but still my baby. I jumped out of bed and saw my husband holding him. He had a gash on his forehead, right between his eyes. He had fallen and hit his face on a toy. Ironically enough, it was on a doctor kit toy. I immediately knew that we had to take him in. After confirming with our amazing pediatrician, and quickly swapping out my sweats for old ripped jeans (so I would look a little less homeless), we were on our way to the after hours emergency pediatric center.

After meeting with a plastic surgeon that evening, and two stitches later, little Brandon was all cleaned up. We were lucky to have such amazing care on a Sunday afternoon. I felt so badly that my precious baby was hurt. On the other hand, I suppose it’s lucky that after over seven years to just now be dealing with something like this.

The three girls waited so patiently in the adorable, kid-friendly waiting room. They colored, watched tv, and had lollipops… At least that part took some stress off of us while we were with Brandon in the other room. Afterwards, we took everyone out to celebrate by picking up some bakery cookies – yum. Brandon couldn’t have been happier. I ate some cookies even though I couldn’t even taste them (a temporary -hopefully!!!- side effect from the ear surgery).

{Back in action after his stitches}

It is not an easy feat trying to get a one-year-old to keep bandages on, especially when they’re on his face. It is a ridiculous battle of him pulling them off, and then me putting on new ones. The first time he ripped them off, I panicked and inadvertently lifted him out of his crib, and onto the bathroom counter… and then off and back onto his changing table, etc. This had better not mess up my ear, but at least my motherly instincts are still somewhat functional.

The rest of the week was filled with some normalcy, until I found out that one of my fluffy doggies might have a torn acl. What??? So, of course, I am giving her daily pain medicine while she hobbles around. I will be taking her for another evaluation shortly. Did I also mention that someone drove into me while I was driving? She was actually very nice, so I felt badly for her. She clearly did not see me at all. If I hadn’t moved over quickly, she would have run straight into me. She was very apologetic, but now it’s just another thing to deal with that I do not have time to handle. If I could barely fit in three showers a week before, now… forget about it! 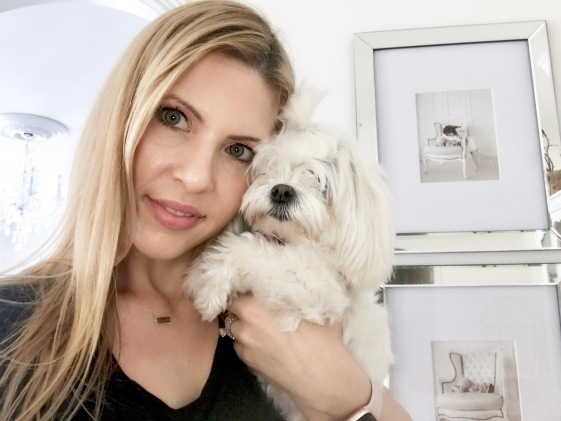 As if I didn’t feel badly enough about what happened to Brandon… It doesn’t end there. Sigh. My three-year-old decided to really shake things up. This same week, she fell from a chair, and the chair fell on top of her. It was one of those moments that I saw happening in slow motion in my head as I was trying to catch her, but couldn’t. Fast forward to finding out that she has a broken toe. This cute little girl now has a giant boot on her leg. No gymnastics or ballet for her for a while… poor girl.  She was such a good sport about getting the boot, but I seriously feel like the worst mom ever. I just hope that all of this proverbial rain will now bring some beautiful rainbows!

{Getting her boot put on – or as we call it, her Cinderella slipper}

{In good spirits thanks to a little ice cream!}

{My poor babies on the mend.}